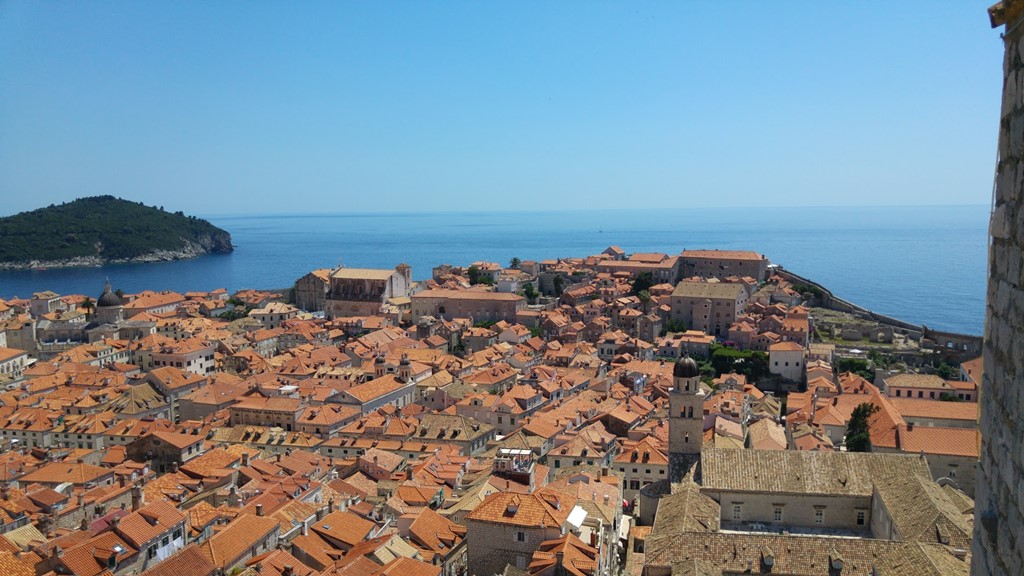 Getting to and from Dubrovnik port

If you are staying in Dubrovnik and want to reach the islands of Lopud, Šipan, Koločep, Mljet and so on, here is how you get to the ferry terminal from the different city parts (where most of the accommodation units are located).

From the old town to the ferry terminal, you can take bus numbers 1A, 1B, 3, or 6 (the other way around also applies).

If you’re staying in the city part Lapad, to reach the ferry terminal you have to take bus number 6.

If you’re staying in Babin Kuk and if you want to reach the ferry terminal, the bus numbers that you have to take are 6 and 7. 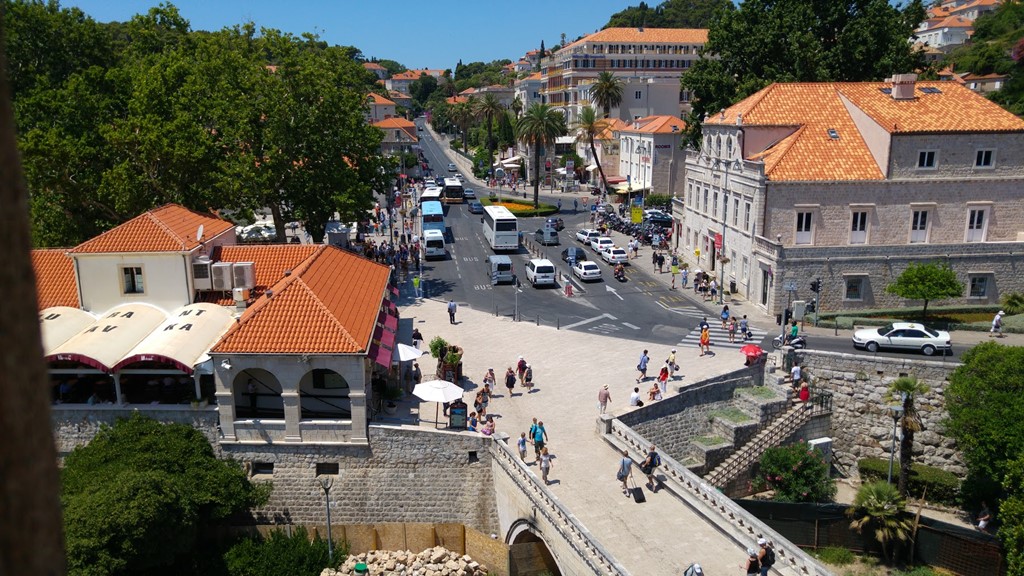 The main entrance to the old town in Dubrovnik

A one-way bus ticket for the local buses costs around 15 kn = 2 euros ( bought on the bus) and a little bit less if bought before (at kiosk).

From all the three parts of the city mentioned above you can also take a taxi which won’t cost you a lot since it’s quite a short distance.

If you, however, are staying in Cavtat, you have to take bus number 10 that will take you to the main bus station in Dubrovnik (located just next to the ferry terminal). A one-way bus ticket from Cavtat is around 25 kn (the journey lasts around 25 minutes).

The other way to reach Dubrovnik from Cavtat is by organizing a private transfer.

All the buses run from early morning to late evening and there are pretty frequent.

From Dubrovnik airport to the ferry terminal:

The airport of Dubrovnik is located around 22 km from the Dubrovnik ferry terminal. Once you land, you can take a pre-booked transfer (which will cost you around 32 euros), take a taxi (that will take you directly to the ferry terminal and it will cost you around 35 euros). There are also shuttle buses running from the airport towards Dubrovnik (all stopping at the main bus station, located minutes away from the ferry terminal). The ticket is around 40 kn – a little bit more than 5 euros and the trip takes 30 – 40 minutes.

If you want to read more about transportation from the airport to the ferry terminal, you can read our guide to Dubrovnik airport. 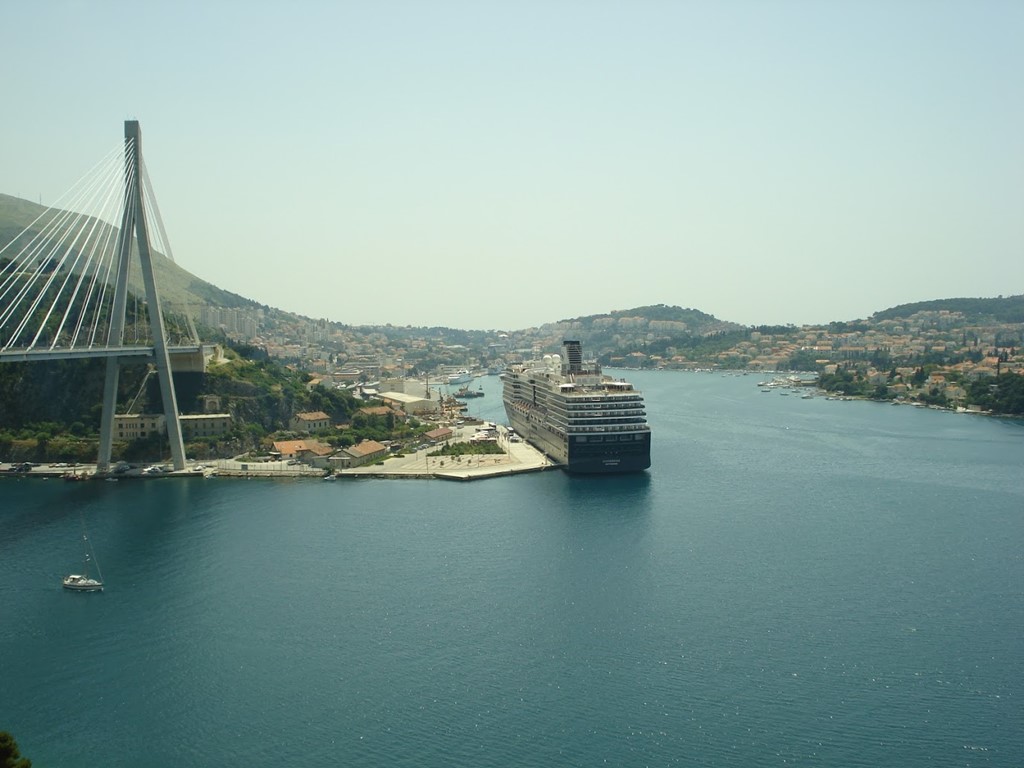 Other destinations to Dubrovnik ferry terminal:

Dubrovnik is well connected by regular and seasonal bus lines with many Croatian destinations. As mentioned above, the main bus station in Dubrovnik is located minutes away from the ferry terminal.

Click on this link to see the exact location: https://getbybus.com/en/bus-from-dubrovnik

You might also want to choose to travel by car. If you’re travelling from the north, when you enter the city, very soon you will reach a big bridge called the Bridge of Franjo Tuđman. The easiest way to reach the ferry terminal is by immediately turning left after it. The road will take you directly to the ferry terminal.

Travelling from the south, do not follow the sign for Dubrovnik, but continue driving straight until you see the bridge in front of you. Once you see it, turn right before it and follow the street directly towards the ferry terminal.

On the ferry terminal or near it you can also find the ATM-s, a bank, info-offices, an exchange office, a rent-a-car office, a few travel agencies, a supermarket Konzum, a market, a mall Srdj,  hotel Petka, restaurants and bars.

Dubrovnik is quite a small town, so a good idea would be to take a taxi if you want to get anywhere in town from the ferry terminal (especially if you have a lot of luggage). This will cost you less than 100 kn (around 13 euros). The other possibility is to take a local bus (the ticket is around 15 kn – less than 2 euros). 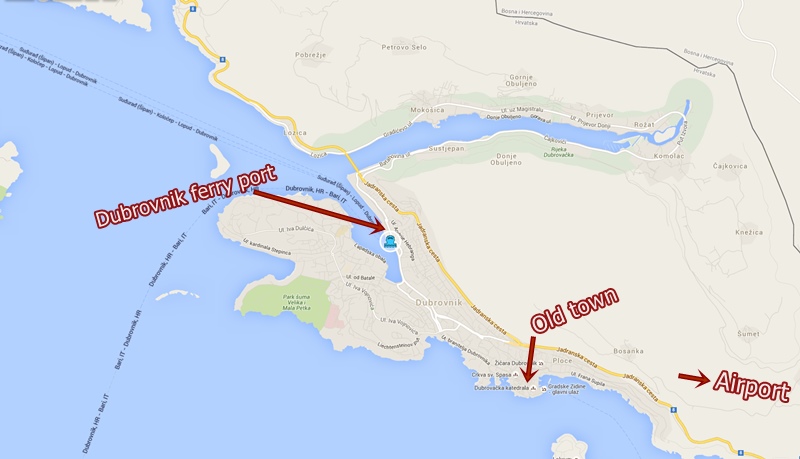 Ferry and catamaran routes from Dubrovnik