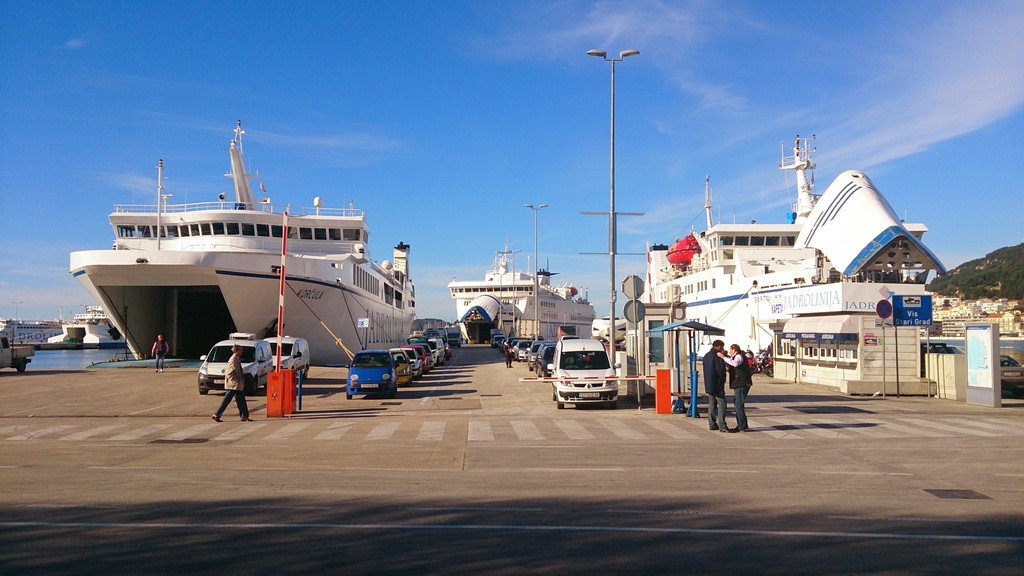 Split is the second-largest city in Croatia and the biggest city on the Adriatic coast considered the capital of the region Dalmatia. The ferry terminal in Split is the main passenger port in the whole of Croatia so it’s well connected to many Croatian islands and even Italy. Besides ferries, there are many catamaran lines that depart from Split towards the islands. The ferry terminal in Split is located only minutes away from the exciting historic city centre where you can enjoy visiting the sights in the old Diocletian’s palace. It is also close to some of the famous beaches. The main bus and train stations are literally across the street from the ferry terminal which makes it perfectly connected with other European and Croatian towns.

Getting to the Split ferry port

If you’re staying in Split and if you want to reach the islands of Brač, Šolta, Hvar, Korčula, Vis and so on, here is how you get to the ferry terminal from some popular parts of the town.

If you’re staying in the old part of the town, the only way to reach the ferry terminal is to walk there (around 10-15 minutes) since the cars are not allowed in the Diocletian’s palace.

If you’re staying in Veli Varoš, it’s pretty much the same thing. There is a main promenade by the sea called Riva between Varoš and the ferry terminal and there are also no cars allowed there. So you’ll have to walk (20-25 minutes) or you can take a taxi in the end of the promenade. It might cost you around 60-70 kn (8-9 euros) since it has to go all the way around the centre to reach the ferry terminal. 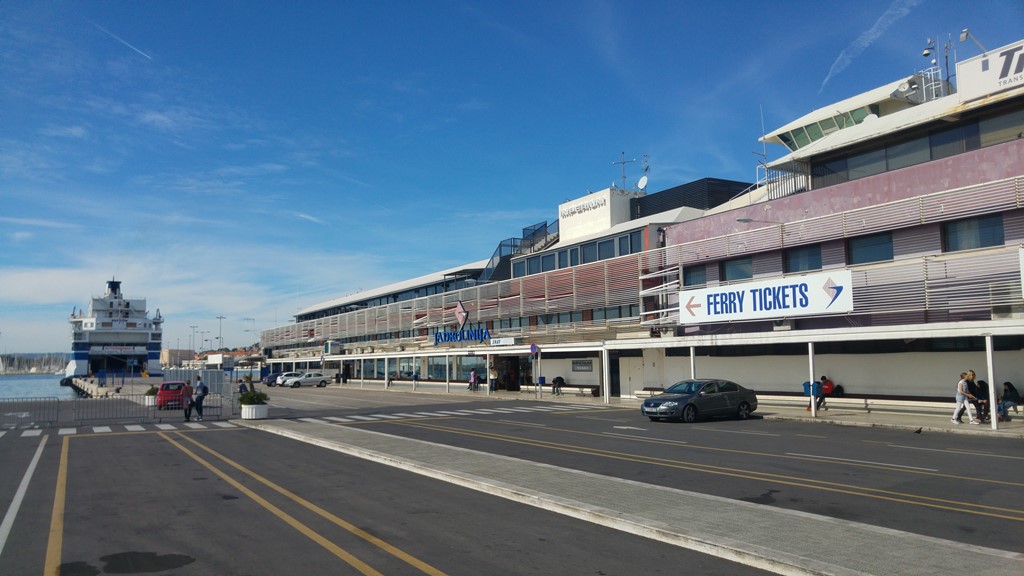 If you’re staying on Meje, you can also take a taxi in front of you apartment/hotel directly to the ferry terminal, which might be a good idea especially if you’re with luggage. You can also take buses number 12 or 21 (depending where on Meje you are staying) that will take you up to the bus stop in the end of the promenade by the sea. From there, you can take a taxi to the ferry terminal (it has to go around a little bit, since there are no cars allowed on the promenade) or you can walk there (15 minutes).

The ticket for the local buses is around 11 kn = 1.5 euros bought on the bus.

If you’re staying in Omiš, Podstrana or Stobreč, the bus number 60 will take you to the green market, minutes away from the ferry terminal. The ticket to Omiš costs around 20 kn = 2.5 euros and a little bit less for Podstrana and Stobreč.

If you are staying in Trogir, the best way is to take a direct bus to the main bus station in Split (across the street from the ferry terminal). The ticket is around 20-30 kn ( 3-4 euros).

You can also take a bus number 37 that passes through little villages along the coast (Kaštela). The bus stops little bit outside of the centre on the bus station SUKOIŠAN (not the main bus station!), so from there it’s best to jump on the bus number 60 and get out at the green market.

All the buses run from early morning to late evening and there are pretty much frequent. Please note, that tickets are a little bit less expensive if bought on the kiosk.

If you’re arriving from Trogir, Omiš, Podstrana, Stobreč, etc. you can also organise a private transfer.

Split airport to the ferry terminal

There is also a bus number 37 that passes through little villages along the coast (Kaštela). The bus stops a little bit outside of the centre on the bus station SUKOIŠAN (not the main bus station!), so from there it’s best to jump on bus number 60 and get out at the greenmarket (minutes away from the ferry terminal). The ticket for bus number 37 is around 27 kn = a little less than 4 euros.

If you want to read more about transportation from the airport to the ferry terminal, you can click here.

From cities in Croatia to Split ferry terminal

Split is very well connected with most Croatian and some European destinations by regular or seasonal bus lines. As mentioned above, the main bus station in Split is located literally across the street from the ferry terminal.

To see the exact location, please click on this link here:

You might also want to choose to travel by car. As soon as you enter from Split from either north or south, taking the highway or the coastal road, you will see the sign for the centre and the ferry terminal. All you have to do is follow it and it will get you directly to the ferry terminal.

Like already mentioned, it’s one of the biggest Croatian ports, located almost in the town centre and the main promenade (Riva), so it’s obvious that you can find all kinds of facilities there or nearby. On the ferry terminal itself you can find a few tickets offices, a post office, a few ATM-s, all kinds of shops, stands with souvenirs and stuff for the beach, bars, restaurants, fast-foods etc. If you need more, you can always walk to the city centre where you’ll find everything you might need for your holiday. 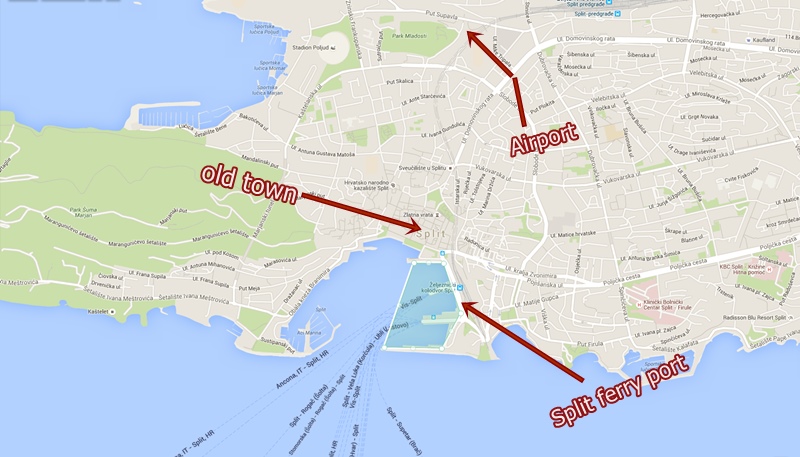 Other vessels routes from Split: 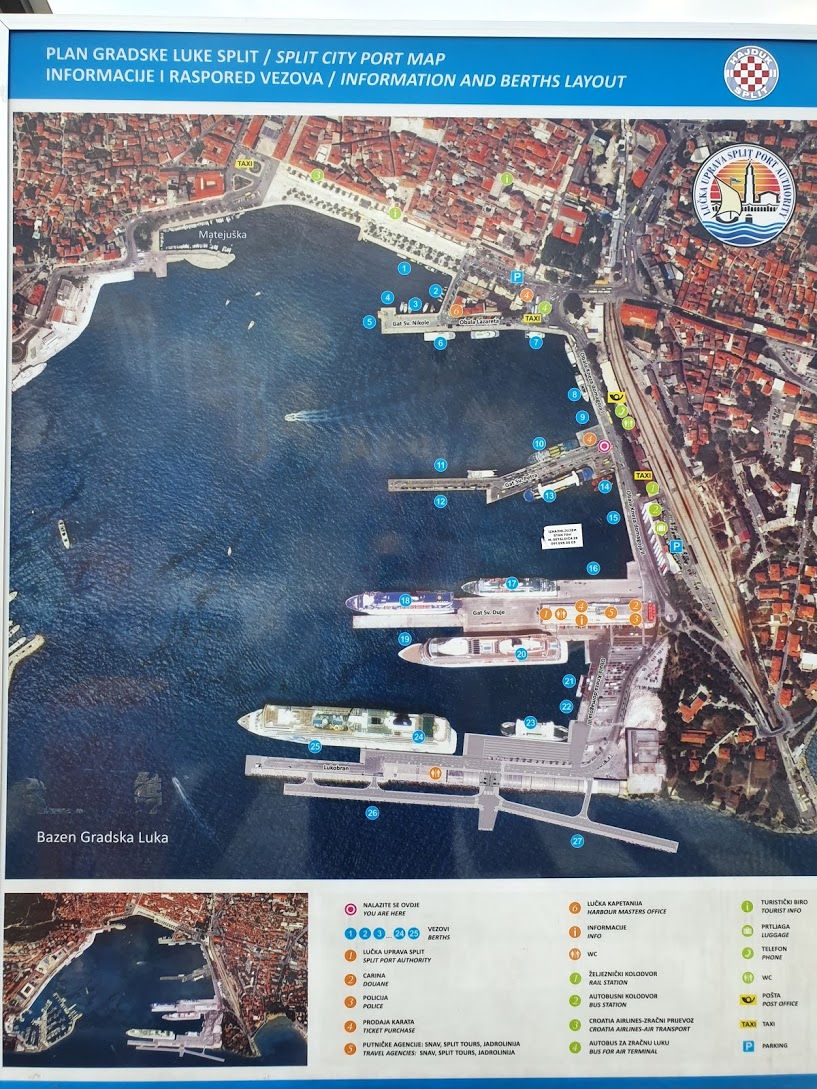